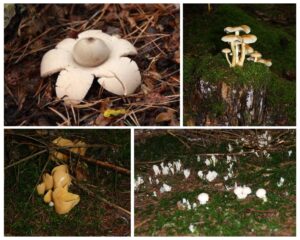 Fringed earthstar, hare’s ear, chicken-of-the-woods, Juda’s ear or devil’s fingers. What would you think, if you heard those beautiful but strange names? Or what about contrary webcap or soapy knight or inky cap?  Maybe even now, most of you wouldn’t be quite sure – but if we said orange birch bolete, toadstool, common puffball or porcini, it would probably be clear, that we are talking about mushrooms. And for those, who don’t know us Czechs very well, I should add, that we love mushrooms. Since early on in our lives, we forage in the forest from July to October with our parents and pick these beautiful gifts of nature and later prepare many delicious meals from them. Therefore it is important that we know what we can and cannot pick. 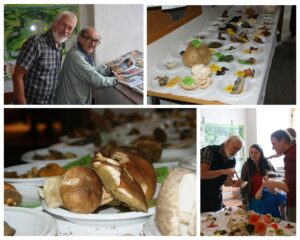 All the above-mentioned mushrooms, and of course many others, were on display at the mushroom exhibition in the Old Town Hall in Prachatice. Enthusiastic mushroom pickers brought over 120 species of mushrooms during the exhibition and every piece they brought was very welcome. Even the fairly common red-capped scaber stalk can be strongly appreciated if you have been trying, unsuccessfully, to find it for two afternoons. 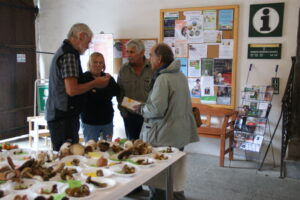 Mushroom pickers visiting the exhibition also turned to the present mycologist Vladimír Špatný with requests to identify the samples they brought and were not sure what species exactly they had in their baskets. A lot of useful information was also learned regarding the occurrence, possible mistakes in identification, edibility or toxicity from the organizers, who can count themselves among the experienced experts. 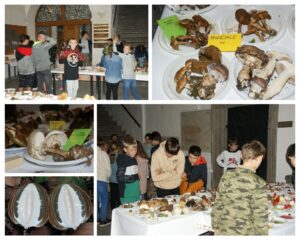 The exhibition was an ideal opportunity for schools to introduce children to the mushrooms of the local forests. Pupils learned a lot of interesting information, for example that there are around 10,000 species of mushrooms in the Czech Republic, of which about 2 000 are edible, that some mushrooms are very rare and therefore protected by law or that the most expensive mushroom in the world is the white truffle. Besides the common widely known species, they could admire, for example, the not-so-common very young fruiting body of the common stinkhorn, which looks like a table tennis ball, but when cut open it already shows the shape it will have as an adult. And for the record – it doesn’t stink. Yet.

Children from several kindergartens also came to see the exhibition and it was obvious from their subsequent stories that they were impressed by the mushrooms and that they remembered the important information.  “There was this really big mushroom…” (it was a giant puffball (Calvatia gigantea), which was about 60 cm in diameter), “the green ones were edible, the yellow ones were inedible and the red ones were poisonous!” (here, a boy of about 4 years old pointed out that the names of the edible mushrooms were on green labels, the inedible ones on yellow labels and the poisonous ones on red labels). 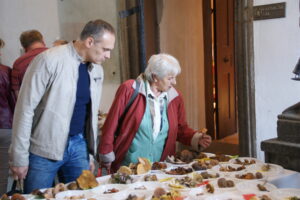 The event also brought opportunities for establishing new contacts in the area and the promise of an intensive mushroom search for next year’s exhibition – if the weather is at least the same as it was this year, mushroom enthusiasts in Prachatice can look forward to an even richer catch next year. And we hope to see you among the visitors.